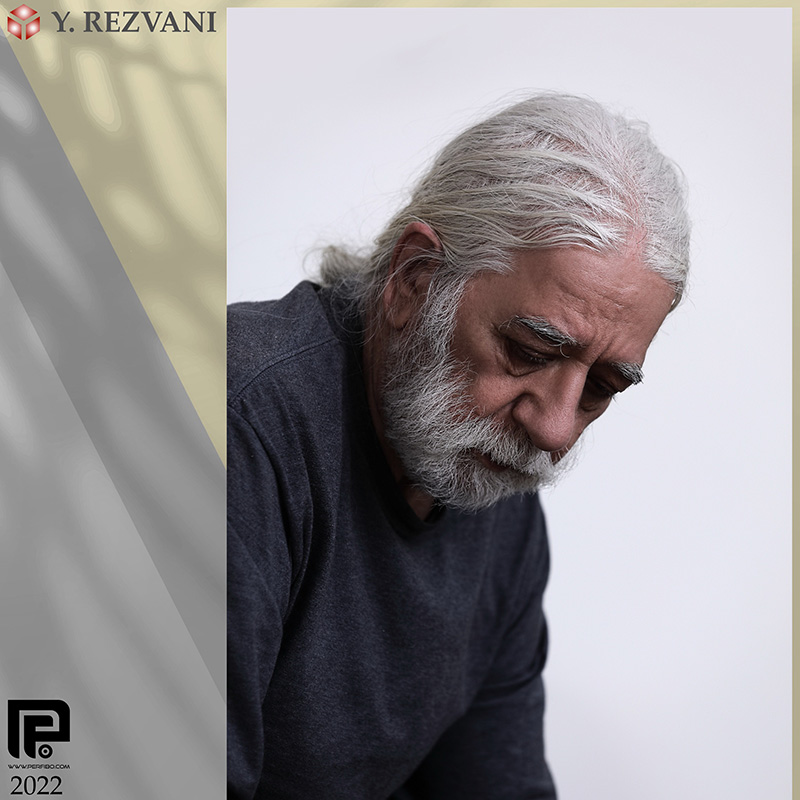 Yadollah Rezvani, born in Tehran in 1948, was always fascinated by sports, painting and reading. After studying Electrical and Electronics engineering at Shiraz University (formerly known as Pahlavi University), he taught swordsmanship at various universities in Fars province and managed to win the national award for said sport. He was the director of painting consortium at the university and hosted numerous solo and group exhibitions every year. After attending a Group Art Exhibition at Khane Aftab Gallery in Tehran, hosted by Pahlbod who was the Minister of Culture and Arts at the time, managed to earn a scholarship from France but was unable to immigrate due to already being a M.A. student. He went to Europe and hosted Art Exhibitions in Paris and Denmark after finishing his conscription. Returning to Iran after being a doctoral student, studying IT in Paris, he performed various activities in different fields.

After the Islamic Revolution, he worked as a consultant approved by UNIDO in the mining industry and helped found over 200 companies such as a Barez INNO since 1983. He never distanced himself from his passion which was studying Iranian history, archeology and art in general which hold many mysteries within which led him to design and produce various jewelries using ancient and archaic methods and hosted exhibitions in Iran and various other countries. Initially, it was pure coincidence that they looked like ancient Iranian artifacts, however later on, after deep studies, they were designed to be as such on purpose and managed to strike a chord with the audience. After studying Iranian cultural artifacts for over two decades, he was written the result of his extensive research in a book titled “زیورها، نمادها و باورهای مردم سرزمین ما- ایرانشهر” which will be published soon. Additionally, his book titled “تندیس سگ وَرجاوند- یکی از کهن ترین زیورهای زرین سرزمین ما ایران” is already published by Mehri Publication in London.

“I had always assumed that my designs and even my thoughts are coming from the collective unconscious inherited from my ancestors so my story began on the day when I decided to learn exactly from where and when I have inherited these. I have studied extensively in various fields such as psychology, philosophy, mysticism, art and history yet I have always felt the lack of semiotics when it came to jewelries so I continued my research in that direction. I have learned and discovered many things during many years and tried to leave my knowledge for the future generations in my book. Other than one already published book, I am still in the process of editing and finalizing my book with the help of my friends and especially my dear wife, Mahvash Afshar Panah as doing so has been my goal in life for a very long time.

When it comes to my designs, they are a result of my research and studies as well as said collective unconscious that I have inherited naturally to which I have become more aware recently. The origin story of my jewelries might boil down to one simple yet crucial incident. I was trying to teach my daughter how you craft something graceful and valuable from wisdom alone. It was not a serious effort at first, but I had to learn how to do so without relying on modern techniques which was a task that required research on ancient techniques and workflows. For instance, I would melt silver then hammer it into sheets by hand. Since I could not use welding as it is a modern technique, I had to resort to using the most primitive and ancient techniques such as casting and etching. Suffice it to say that there exist certain most valuable ancient artifacts that we cannot even reproduce easily using the most advanced techniques of today and I have always been astonished by that fact and the sheer wisdom and skill of our ancient craftsmen.

I would not go so far as to call myself a patriot but I have always had this deep respect for my nation and its long history; a respect which has only grown over time and I am truly proud to have had such ancestors that truly deserved to be called artists.

Most of my art has already been sold in forgein and domestic exhibitions and their pictures are available, especially those I have crafted using ancient and rather dangeous gilding methods. The same dangerous method used to craft golden domes for holy places even recently. That is all I can remember as I have not crafted any new work for about a decade and my current works are a decade old. When it comes to choosing names for my work, I did so a couple of years after they were crafted. I named them after remembering the old times and my inspirations for crafting the works. I know not how successful I have been but I know this; a wise man once said: A piece of art is truly born in the hands of the audience, if it could be called a piece of art. I hope the audience of Perfibo is satisfied by these works and I hope I find the chance to present more in the future.”